is a term often used in context when talking about a special mark type. It only used by commercial porcelain decorators at first, but was later adapted for multiple purposes.

To understand its origin, one has to know that various manufacturers had appealed for a certain form of protection regarding their trademarks and designs, due to the fact that many decorators up until then simply applied their own marks next to those of the original manufacturer. The manufacturers argued that such a mark placement could be misunderstood as a sign of affiliation and thus had to be stopped as only licensed distributors and/or retailers were granted such a privilege. As side effect, the manufacturers also hoped to counter the increasing number of decoration studios which were slowly but surely negatively influencing sales of factory-decorated items.

As consequence of the appeal, a law was passed which forced commercial decorators to obscure or completely hide the marks applied by the original item manufacturers. At first studios simply painted a simple gold shape (mostly flowers, but also other elements) over the original mark, resulting in what was dubbed a cover-up mark. Later on, pre-fabricated transfers or decals were used to cover up the original markings.

Various examples show that both types of cover-up were not always (intentionally or not) applied correctly. Incorrect size or far too transparent transfers often show enough of the original mark which is then easily classified and dated, a bonus for people today as it makes research on and classification of items much easier.

But all that is only half the story: one should always hold in mind that cover-ups (especially the transfer version) were not only used by decorators. As the market developed and changed, various resellers, retailers and importers (authorised or not) applied them just as often as some manufacturers. Just to name an example, Rosenthal used multi-color transfers on some items that were upgraded in their own art department (e.g. the 'Royal Ivory' series) or on items that were created for secondary outlets (e.g. Stonegate China).

Many cover-up mark types were used by undocumented studios or decorators, meaning that one normally can not find out who actually (re)decorated an item. There is a non-destructive and thus pretty helpful trick that at least allows curious minds to find out who created the original item, even if that does not say anything about decoration age, origin of the decorator or company affiliation. Again, this *only* helps to find out the origin and rough date frame of the original, untreated item! 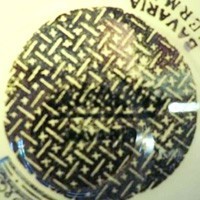 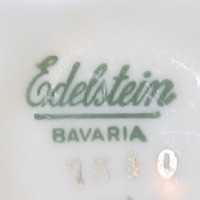 Reference Example
... and can then be compared with existing reference material.
(Picture by Jacqueline Kacprzak)